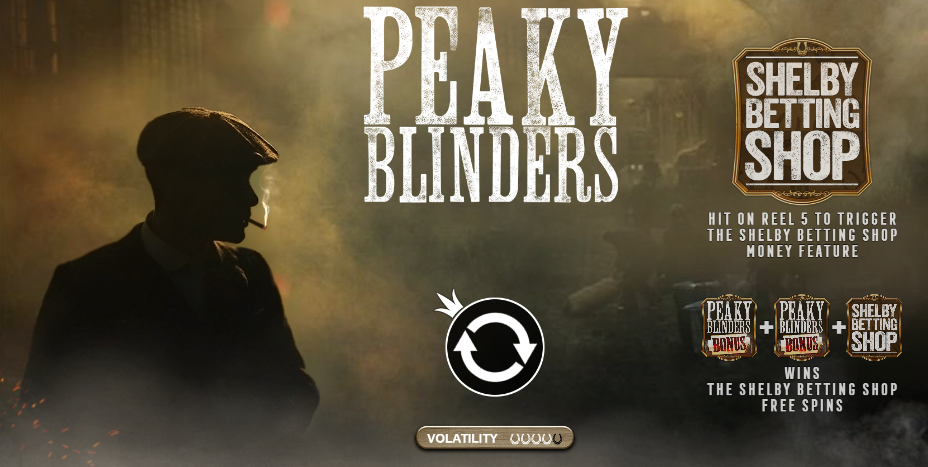 I reckon that you like Pragmatic Play. One of the best iGaming providers in the industry. If you do, this will be a treat for you! The very popular show about the British crime family got its slot version. It’s the first slot game ever that Pragmatic branded! Let’s dive into the Peaky Blinders slot game.

No worries if you haven’t seen this popular show yet. In the game, you will have a chance to meet Michael Gray, Polly Gray, Arthur Shelby, and Thomas Shelby. Some of the main characters in the show. During slots spinning some of the references from the show will also appear on the screen. Bonus features and free spins are hiding behind those references! It’s time to check the Peaky Blinders slot game in detail.

Game Visuals
For the purpose of the atmosphere, the background of the game is a back alley. You can see fire and smoke and as a result, you really feel like you are in Birmingham between two wars. In case you didn’t know that is a timeline where the show takes place. Music from the show which plays in the background sets the mood accordingly. To put it another way, if you are a fan of the show, you will like this slot game as well!

As you can see in the image above, Peaky Blinders are a visual style slot, and the mechanics of the game are pretty straightforward. Inspiration for the slot has clearly been taken from pioneers of the industry. The Peaky Blinders slot game is a 5-reels, 20-payline game. You can play from 20 p/c up to 100€/£ per spin. Return to Player or RTP is 96.5%. The volatility of the game is pretty high. It has been rated 4/5 which means medium to high volatility.

If you manage to land full line of the highest paying symbol, in this case, Thomas Shelby. Payout is worth from 5x to 20x time of your stake. Besides high-paying symbols, you have regular low-paying letter symbols. Of course, there is a wild symbol that can land anywhere and 5 of those are also worth 20x of your stake!

Peaky Blinders Bonus Game
Besides rounds of free spins, there are two additional base game bonus features that can be triggered. One the last reel, two special symbols can appear. The first one, “Shelby Betting Shop Bonus” triggers all high-paying symbols that landed, adds them up, and pays you out. The second bonus feature is called “By the Order of Peaky Blinders”. When this one lands on the last reel all win lines are paid and re-spin is triggered. After the spin, all wilds and high-paying symbols are shifting into a matching symbol. This can result in a huge winning!

Free spins are triggered when the logo bonus lands on either reel 1 or 3. You’ll need two of them and one of the scatters mentioned above. Free spins are pretty much the same as the base game is. You get 8 free spins in if you land “Shelby Betting Shop Bonus” and extra scatters are added to reel 5. “By the Order of Peaky Blinders” will award you with 10 free spins, and also, with extra scatters. Neither of the free spins features can be retriggered!

Final Words
The Peaky Blinders slot game is not just for fans. I truly believe that anyone can enjoy it. It doesn’t bring anything revolutionary or overly exciting to the table, but the atmosphere and the possibility for some really exciting wins are definitely there! I can’t say that Pragmatic Play outdid themselves on this one, but they managed to turn a very popular tv show into a fairly decent slot game.

So if you didn’t do so yet, give the Peaky Blinders slot game a go. You’ll have fun!